The Latest Rolex Air King: Why You Should Get It? 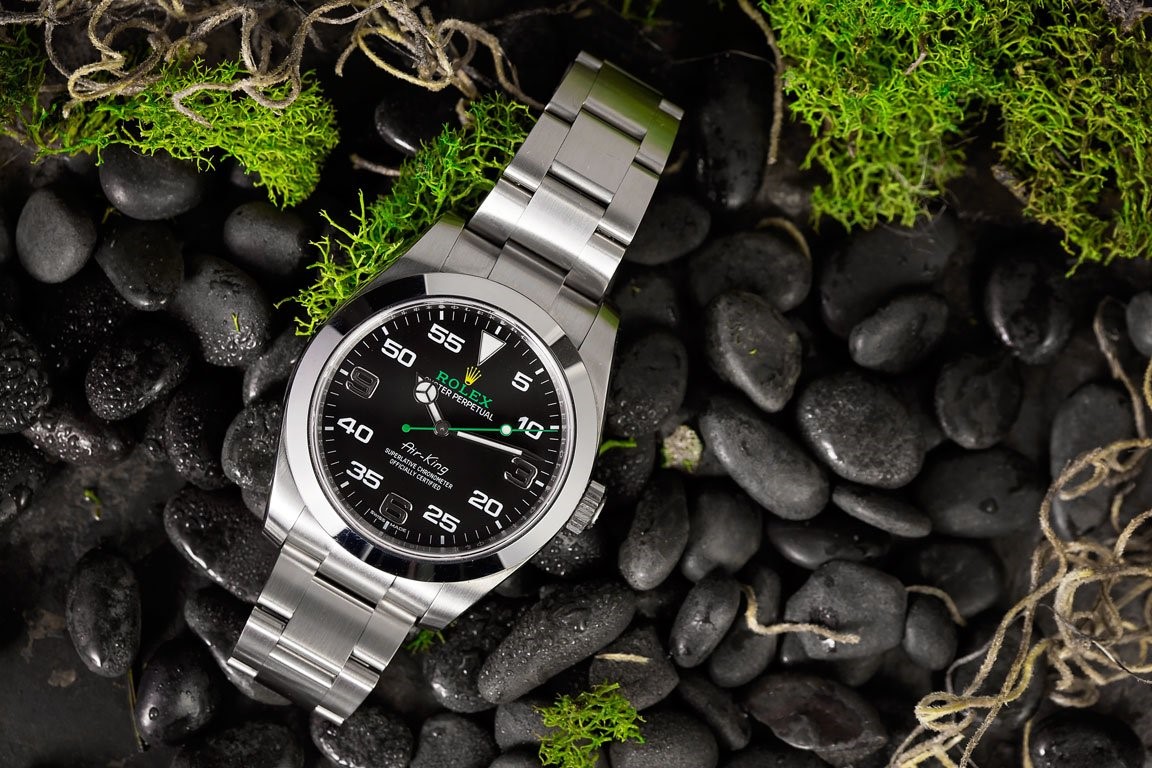 The Rolex Air King, introduced in 1945, was part of the collection of watches created by the brand to honor the RAF pilots of the Battle of Britain. The other models in the series – Air-Lion, Air-Giant, and Air-Tiger – were discontinued in the 1960s, but the Rolex Air King endured. It lacks the bells and whistles of today’s aviation watches, but pilots loved the Rolex Air-uncluttered King’s and easy-to-read design back then. Ever since the Rolex Air-King has been a time-only watch with a 34mm case. Some design variations have been introduced over the years, including the engine turned bezel, concentric dial, and Roman numeral markings.

The latest Rolex Air King 116900 is 40mm in diameter, the same as the brand’s most popular sports watches, the Submariner, GMT-Master, and Daytona. The Air-King holds a special place in Rolex’s watch collection, and after several years of being out of manufacturing, Rolex revitalized the model with the Air King 116900. The acrylic crystal was also replaced with a more durable synthetic sapphire. Furthermore, the simple dial designs had vanished. They were replaced by a single dial design with a variety of details. The Air King ref. 116900 bears no resemblance to its predecessors. The term “predecessors” is deceptive because it implies commonality when, aside from the name and time-only layout, there aren’t many resemblances.

The company created a uniquely engineered speedometer and chronograph for the Bloodhound SSC, a super sleek, jet-and-rocket powered car designed to break the world land speed record, in 2014. The Bloodhound SSC project eventually ended, and it was replaced by the Bloodhound Land Speed Record project, which was independent of Rolex but still aimed to break the world land speed record. Irrespective, this is an intriguing tidbit for Rolex fans that may also be car and watch enthusiasts.

The bespoke instruments designed for the car will provide Andy Green with the information he requires to safely fly past 1,000mph—and the dial of the 2016 Air King is unmistakably reminiscent of these highly precise, record-breaking cockpit indicators. The distinctive dial, bold and unapologetic, represents a willingness to think outside the box and push the boundaries.

It’s a watch with risk-taking built into its DNA, inspired by the daring of wartime pilots and now influenced by land speed pioneers. It must capture your attention, do things differently, and remind us of Rolex’s uncanny ability to venture far beyond its comfort zone. The Air King is dismissively compared to more traditional models of the past, but the fact that the watch is so divisive only contributes to its storyline. This is a watch that dares to be different from the crowd.

The Air King case’s size has shifted dramatically. The once-compact 34mm stainless steel case has grown to a much larger 40mm size. To put it in context, that is the size of a Submariner or GMT-Master II. This latest Air King isn’t as durable as the latter two, but it’s still a 40mm Rolex, putting it in a completely different league in terms of size. The Air King 116900 has the same antimagnetic protection as the Milgauss, making it as resistant to electromagnetic forces as the legendary watch designed for scientists who work with particle accelerators. Because it has an Oyster case, the Rolex Air King 116900 is water-resistant up to 100 meters (330 feet), making it more than capable of withstanding the rigors of everyday wear.

The colored Rolex wordmark and logo, as well as the double-digit numbers on the dial, are influenced by the instruments aboard the Bloodhound SCC, a supersonic record-breaking car. Since 2011, the company has been a supporter of this project. At some point, the brand provided a speedometer and a chronometer to the Bloodhound SCC project. These board instruments have a design that is very analogous to this Air King 116900.

The most noticeable upgrade to the redesigned Air King 116900 is its quirky and unusual dial. Its black background creates a neutral backdrop for everything else to stand out. A lot is going on here, between the oversized 3/6/9 numerals, the white five-minute markers, the green Rolex print with matching green seconds hand, the vintage Air King font, and the Mercedes-style hands. The markers and hands on the dial of the Air King 116900 are hand-applied and made of 18-carat white gold. It makes use of superluminova for its luminosity. The brand’s patented “Chromalight” material. It’s also worth noting that this Air King dial is the only dial ever to have the company’s crown and signature printed in two different colors – Rolex in green, the crown in yellow – adding to the unusual context of this particular reference. A further latest addition to the dial is the text “Superlative Chronometer Officially Certified,” which now meets the rest of the Rolex lineup.

The Air King 116900’s more outgoing personality is reflected in its dial, which is uncharacteristically Rolex. Despite the apparent bold new details, the black dial effectively blends the various design elements, and the stainless steel case makes it suitable for most events.

Rolex Caliber 3131 – the same automatic movement used in the Milgauss – is installed in this amazing watch. This is a tried-and-true movement that will last for years. The Air King has an internal shield that greatly enhances its resistance to magnetic fields. Aside from magnetically unaffected components like the blue Parachrom hairspring and nickel-phosphorus lever, the movement is also enclosed inside a Faraday cage to protect it from magnetic interference. The Caliber 3131 has a power reserve of up to 48 hours and is a COSC-certified chronometer, promising an accuracy rating of -2/+2 seconds per day.

The beautiful Rolex Air King has been a comparatively easy model to find, but the reference 116900’s larger size and bold styling have made it just as difficult to find as many of the brand’s other stainless steel watches. The Rolex Air King 40mm ref 116900’s unique and rather interesting design, combined with its technical prowess, makes it an ideal choice for the Rolex fan who wants to stand out. Get yours right away. It is a watch with historical significance, especially given the lengthy production time. It’s a modern timepiece that appears to be very up-to-date with today’s design principles.